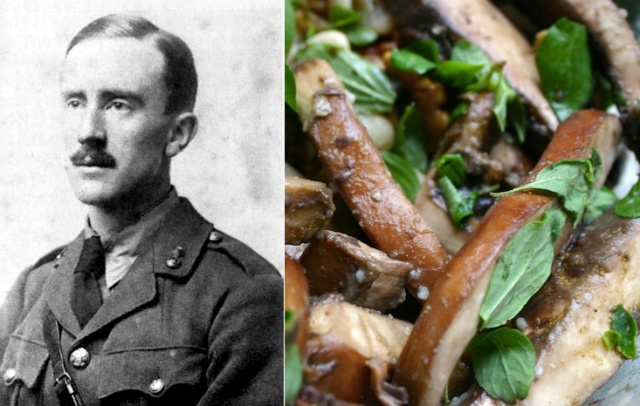 One of my New Year’s resolutions is to accept the incomplete. I’m usually soothed by the neatness of finality, of closure; I like dotted i’s, rounded edges, the calm you get from Inbox Zero. That tidiness inevitably extends to my reading life: I’ve only abandoned three books that I can remember, preferring to soldier on through unmemorable chapters than to let an unfinished plot clutter my thoughts. One of those deserted books was The Hobbit.

My resistance to Tolkien, I always believed, came from a general disdain for fantasy. Tolkien spent years creating his fictional universe: the phonology of Elvish, the cosmology of Middle Earth, foods that can fill you up with just one bite (a recipe that others have now spend their own years trying to recreate). Why take ages creating new worlds, I thought, when we have a perfectly good one to explore right here?

But while much of the food and drink in the Lord of the Rings trilogy has magical properties, the hobbits themselves subsist on a more down-to-earth diet—literally. Frodo is particularly fond of mushrooms, stealing them from his neighbors’ yards (a practice I wouldn’t advise unless you, like Bilbo, have 111 years of mushroom-picking experience to fall back on). “There was beer in plenty, and a mighty dish of mushrooms and bacon, beside much other solid farmhouse fare,” Tolkien writes; you’d probably see a similar menu at your local gastropub.

You might think that someone who dreamed up a “vitality drink” that cures all pain might want to experiment with it himself, or at least go for some fancy tasting menus. Yet, Tolkien’s eating habits were much closer to Frodo’s stolen produce than the magical cuisine of the Elves. “I am in fact a Hobbit in all but size,” he wrote in a letter. “I like gardens, trees, and unmechanized farmlands; I smoke a pipe, and like good plain food (unrefrigerated), but detest French cooking; … I am fond of mushrooms (out of a field); have a very simple sense of humor (which even my appreciative critics find tiresome).” Years later, the Brooklyn Tolkien Society would plan their menus around fresh mushrooms, in solidarity with both hobbits and their creator.

Mushrooms are seemingly the most modest of foods, growing nestled close to the earth, humble hobbit fare. But they’re also inherently magical: shape-shifters that absorb the flavors of whatever is cooked with them—or give you a nightmare or two, depending which ones you grab. Fantasy is similarly ambiguous, intentionally making it difficult for us to tell what is and what is not. So perhaps this is the year to finally sit down, reopen The Hobbit, and embrace its magic, in all its messiness. 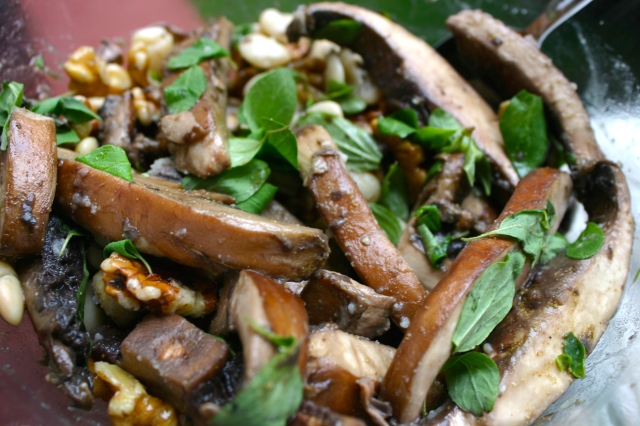 Maybe the most magical thing about mushrooms is that I learned to like them at all. They were persona non grata at our dinner table when I was growing up, and it wasn’t until the junk food nights of college that I started to accept them as a pizza topping, then as the main ingredient in a meal, and finally raw, the way hobbits and Tolkien intended.

Raw mushrooms demand a marinade—something that will temper the earth flavor as well as break down some of the tough cell walls. This recipe, adapted from Yotam Ottolenghi’s excellent vegetable omnibus, Plenty, pairs them with a tahini yogurt sauce for a Middle Eastern take on Middle Earth.

(Adapted from Plenty by Yotam Ottolenghi)

1. In a small bowl, combine oil, vinegar, cumin, maple syrup and lemon juice, plus salt and pepper to taste. Add mushrooms to a large bowl, then pour dressing over. Cover and set aside 1 hour.

2. In another small bowl, whisk together yogurt, tahini, garlic and zaatar. Cover and refrigerate until mushrooms are ready.

3. Drain liquid from mushrooms and return to the bowl. Add butter beans (drained and rinsed), walnuts and fresh oregano leaves. Serve in small bowls with a dollop of yogurt sauce.