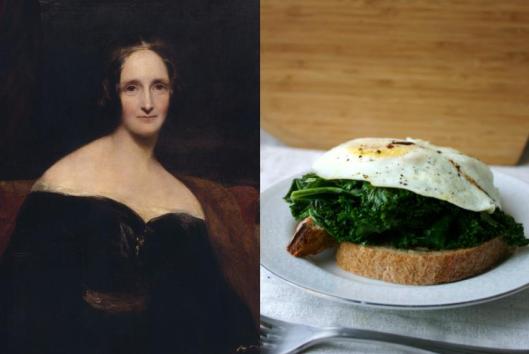 With the polar vortex hitting New York and my Californian disregard for warm coats, it was bound to happen: I am sick. Not sick enough to be devastating, but just sick enough to be achy, whiny, and wishing for a cup of tea and a bowl of soup at all times. Instead of indulging myself, though, I took a cue from Mary Shelley, pulled on my pajamas, and made kale.

It’s tempting to think of kale as a marvel of modern marketing, engineered by the savvy people of Whole Foods to make us eat our vegetables. But the leafy green was one of the most common types of produce in Europe before it was outpaced by cabbage around 1600, and its popularity continued into the 18th century. For Shelley, kale wasn’t a trend, something to be massaged or blended into drinks. It wasn’t “healthy.” It was comforting.

Mary was the resident caregiver in her literary family; her husband, the poet Percy Shelley, wasn’t so good at looking after himself. “He could have lived on bread alone without repining,” his biographer Richard Henry Stoddard wrote. “Vegetables, and especially salads … were acceptable.” Mary was the one who made sure her husband was fed, not that he noticed much. She “used to send him something to eat into the room where he habitually studied; but the plate frequently remained untouched for hours upon a bookshelf, and at the end of the day he might be heard asking, ‘Mary, have I dined?'”

Food has long been our chosen way of providing for those we love; when I was in college, my mom’s “care packages” were 5% socks, 95% cookies (a ratio I heartily approved of). Mary Shelley’s letters show just how far back the tradition goes. When her aunt Everina fell ill, Mary, far away in Rome, dispatched a friend to put together a care package of her own: “jelly, oranges, spongecakes and her favourite kale.” Kale became a frequent gift, an all-purpose treatment for what ails you.

A new batch of Shelley’s letters was recently discovered from when she herself was ill, with a brain tumor that would kill her a few years later. Percy was gone by then, as was Everina. The only person Mary had left to care for was herself, hopefully with her friends around her and some kale on the stove, cooking to heal the soul. 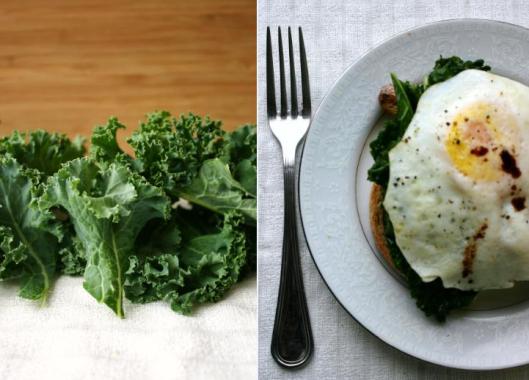 Kale can seem like a spartan choice for dinner, but when served at brunch—stewed, with an egg on top—it becomes something rich, warm and inviting. Drizzling the eggs with vinegar, as Roger Vergé suggests, adds a brightness that transforms greens into a hearty meal, a cure-all.

Another benefit of this breakfast, especially for those low on energy, is its adaptability. Although tartines are typically made with pain au levain, Shelley would have preferred an Italian ciabatta; while in Rome, she wrote that the bread, “which is uneatable in France, is here the finest and whitest in the world.” You can also change your eggs to scrambled, sunnyside up or even poached—whatever comforts you the most.

1. Preheat oven to 350°F. Place bread slices on a baking sheet and toast 2 minutes; flip slices over and  toast 2 minutes more. Cut garlic clove in half and rub cut side on all surfaces of the bread.

2. Add 4 tablespoons oil to a large pot (with a lid) over medium heat. Add onion and cook, stirring occasionally, until translucent and starting to brown. Add broth, kale and salt, cover, and cook 3 minutes. Remove cover and cook until kale is tender and water has mostly evaporated, about 4 minutes more.

3. Meanwhile, add remaining 2 tablespoons oil to a nonstick frying pan over medium-low heat. Crack eggs into pan, season with salt and pepper, and cook until whites are just set, about 2 minutes; flip and cook 10 seconds more.

4. Place bread on a serving plate, divide kale over the 4 slices, and top each with an egg. In the same frying pan used for the eggs, add vinegar over medium heat and cook until reduced by half. Drizzle over eggs, top with parmesan, and serve.

Note: Thanks to everyone who participated in the 2nd birthday giveaway! As announced in this month’s newsletter, the winner is … Becky Teague!
We’ve gotten in touch with Becky already to ship out the prize. Congratulations, and stay tuned for future giveaways.