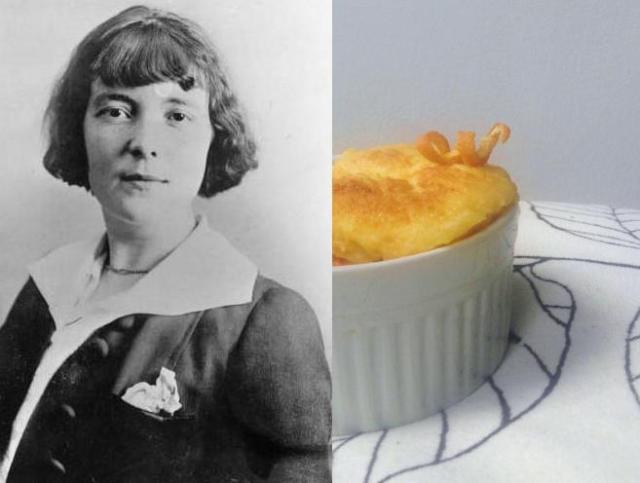 Note: I’ve never had a guest post on P&S belore, but when Aimee Gasston told me about the unpublished recipes she found in Katherine Mansfield’s papers, I couldn’t wait to have her share one here. Plus, I’ll clearly take any opportunity to trot out my ramekins (I’m a sucker for individual-size desserts). Enjoy, and many thanks to Aimee.

Another Note: If you’re reading this via Google Reader, there are alternatives to get P&S updates after Reader shuts down tomorrow. Plus, you can always find what’s up on Facebook. Okay, back to regularly scheduled programming.

It’s lucky that Katherine Mansfield, maybe the key innovator of modernist short fiction, had such a hearty appetite, without which her prose would be far less rich. Virginia Woolf described Mansfield as having the finest senses of her generation – so when I heard about newly discovered food-related material of hers acquired by the Alexander Turnbull Library in Wellington, New Zealand, I couldn’t wait to get a look at it.

Plump as a child, Mansfield would be made gaunt by tuberculosis in adulthood, but her hunger for worldly pleasures remained constant throughout her truncated life. Her personal writing is full of daydreams involving food, which she vividly described in letters and journals as she traveled Europe in search of health.

Switzerland was a particular disappointment, as she wrote in a letter to the artist Anne Estelle Rice in 1921: “Curse them. And the FOOD. It’s got no nerves. You know what I mean? It seems to lie down and wait for you; the very steaks are meek.  […]  As to the purée de pommes de terre, you feel inclined to call it ‘uncle.'”

Despite her love of eating, cooking wasn’t the most pressing of Mansfield’s priorities due to her poor health and a fierce dedication to her work. In her excellent biography A Secret Life, Claire Tomalin describes Mansfield and her husband John Middleton Murry’s juvenile culinary tendencies: “Like children, they lived mostly on the junk food of the day, meat pies and the cheapest possible restaurants; Katherine had no time or wish to cook.”

Instead, Mansfield’s cooking would take place largely on the page. Besides the spirited culinary rhymes that she penned amid her account books (including an unpublished poem called “An Escapade Undertaken by a Green Raspberry and a Kidney Bean”), her short fiction was always embroiled with the messy materiality of life, with prose you cannot only see, hear, touch and smell, but really taste. 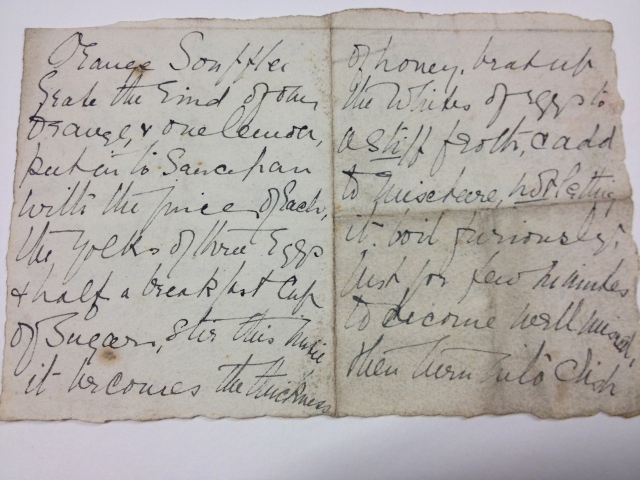 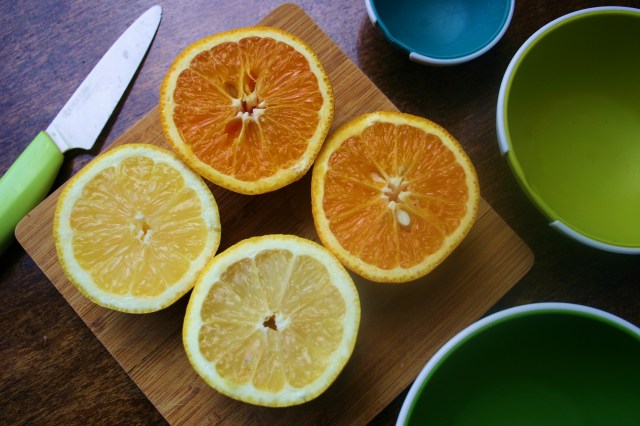 This past February, I traveled to Mansfield’s birth city from London as part of my PhD research and got a firsthand look at some fascinating manuscripts (many thanks to Birkbeck for their help toward extraordinary research expenses, as well as to the Alexander Turnbull for letting us reproduce the recipe here and their kind staff who were of great help during my stay).

Researching at the Turnbull was a humbling experience, and it was such a thrill to hold typescripts, notebooks and letters in my hands as their authors once had.  (My top archive tip: Make sure you have a tissue in your pocket, especially if you are mentally fragile from jet lag. I almost sobbed all over a letter from Mansfield to her husband setting out her will, at great risk to the archive’s preservation.)

Besides the rhymes that Mansfield penned amid her account books, and her food shopping lists composed in between fiction, I also saw as yet unpublished documents, handwritten recipes for coldwater scones and orange soufflé. The latter combines a riotous opposition of tastes (sour citrus and sweet) and textures (feather-light foam and sherry-soaked stodge) in much the same way as Mansfield’s writing captured life in all its multifarious, ornery complexity.

The recipe “translation” for the soufflé below is my own (Mansfield’s handwriting is notoriously difficult to fathom) but the cooking, thankfully, is Nicole’s.

Grate the rind of one orange, & one lemon, put into saucepan with the juice of each, the yolks of three eggs & half a breakfast cup of sugar, stir this until it becomes the thickness of honey, beat up the whites of eggs to a stiff froth, & add to juice base, not letting it boil furiously, just for a few minutes to become well mixed then turn into dish with or without spoon[,] cake at bottom, sopped in sherry wine & … jam, under these final conditions it would be called a party pudding!

1. Preheat oven to 375°F. Grease and flour 4 8 ounce size ramekins and set aside. Reserve 1 tablespoon of zest from the orange and lemon, then juice them both in a small bowl.

2. In a large saucepan over medium heat, combine milk, 2 tablespoons sugar and the zest, whisking until milk reaches a boil. Remove from heat, then whisk in butter and juice until butter is melted. Whisk in egg yolks, one at a time.

3. With an electric mixer, beat egg whites and salt in a large bowl until soft peaks form, then gradually add remaining 2 tablespoons sugar to stiff peaks. Gently fold whites into the orange cream until incorporated, then divide among 4 ramekins. Bake 20 minutes until tops are puffed and golden.

4. While soufflés are baking, make the sherry syrup: In a small saucepan over medium heat, whisk together sherry and sugar until sugar is dissolved. Let simmer 4 to 5 minutes, until thick enough to coat the back of a spoon.