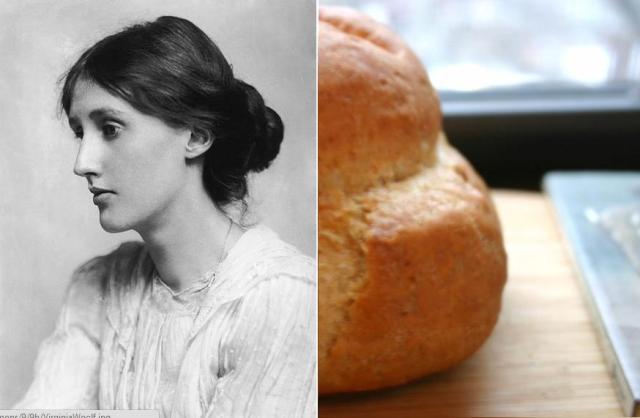 Every time I get discouraged by writing, I engage in a bit of schadenfreude, and soothe myself with the frustrations of others. “I write two pages of arrant nonsense after straining … Then I trust to some inspiration on re-reading.” That’s Virginia Woolf while writing The Waves, but I’m pretty sure I said the same thing, more or less, while writing this post.

This constant self-effacement is a theme that runs through Woolf’s letters. Her talents didn’t really lie in the library, she would tell you. They were in the kitchen. “I have only one passion in life — cooking,” Woolf wrote to her friend (and occasional lover) Vita Sackville-West. “I have just bought a superb oil stove. I can cook anything … I assure you it is better than writing these more than idiotic books.”

Where Woolf hesitated to praise her own writing, she wasn’t nearly so shy about her talent for baking. “Cooked lunch today and made a loaf of really expert bread,” she wrote. Bread was her specialty, particularly a traditionally British double-decker creation: the snowmanesque cottage loaf. Her dedication to the kitchen was unusual for a woman of the upper-middle class. She did, however, draw the line at doing the dishes (“How servants preserve either sanity or sobriety if that is 9/10ths of their lives … God knows”).

In Recollections of Virginia Woolf, Louie Mayer, the Woolfs’ cook, marvels at Virginia’s calm expertise. “She showed me how to make the dough with the right quantities of yeast and flour, and then how to knead it. She returned three or four times during the morning to knead it again. Finally, she made the dough into the shape of a cottage loaf and baked it at just the right temperature.”

It’s Woolf’s birthday today; she would have been 131, although she didn’t make it even half that far, her mental illness wearing her away. But from Woolf’s letters, the time she spends cooking seems to be its own rest cure, clearing her head of everything else but the dough. “My bread bakes well,” she writes in her diary, and it resounds like a soothing mantra. If all else fails, I tell myself, my bread bakes well. My bread bakes well.

We don’t see many cottage loaves today. Even in the early 20th century, when Woolf was writing, they were going out of fashion. It’s believed they were originally shaped to save space in an oven — rising vertically instead of spreading out over the oven floor — but their unusual dimensions make them harder to cut or use for a sandwich.

But Woolf wasn’t the only literary champion of the cottage loaf. George Orwell, ever the expert about traditional English cooking, extolled its virtues as among the best food the U.K. had to offer, good just on its own. “If there is anything quite as good as the soft part of the crust from an English cottage loaf,” he wrote, “… I do not know of it.”

1. In a large bowl, sift together flours and salt. In a small bowl, dissolve yeast in water. Add to flour mixture and stir until dough forms. Let rest 10 minutes.

2. On a floured surface, knead dough briefly, then return to a greased bowl and allow to rise 1 hour at room temperature. Cover bowl with plastic wrap and refrigerate overnight.

1. Remove the preferment from the refrigerator, cut into 8 wedges, and let sit 1 hour until it reaches room temperature.

2. In a small bowl, dissolve yeast in water. In a large bowl, mix together preferment, dissolved yeast, flours, and salt until a rough dough forms. On a floured surface, knead dough 10 to 15 minutes until smooth and elastic. Place in a greased bowl and let sit in a warm place 30 minutes, or until it has doubled in size.

3. Divide dough into 2 pieces (with 1/3 and 2/3 of the dough respectively) and form into tight balls. Place rounds on a greased baking sheet and set 10 minutes.

4. Preheat oven to 425°F. Place the smaller round on top of the larger round. Push a floured chopstick (or wooden spoon handle) completely through the center of the top round and 2/3 of the way into the bottom rounds to join them. Slash both rounds.

5. Bake 40 to 45 minutes, or until golden brown and loaf makes a hollow sound when tapped on the bottom.

Giveaway Update: A big hug and lots of chocolate to everyone who participated in the Paper and Salt birthday giveaway! I’m excited to announce that the winners are:

Congratulations! I’ll be emailing/Facebook messaging you shortly so your books can find their new homes.