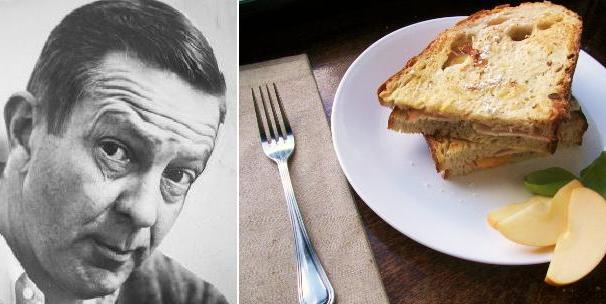 Whenever I need to make idle chatter, talking about meals is generally a safe, friendly topic – unless that meal is brunch. I’m going to go out on a limb here and say that lunch and dinner are pretty universally well liked. And while the merits of breakfast have certainly been debated (despite being repeatedly chastised for not eating it, I somehow am still alive), brunch just gets people unusually riled up.  For the anti-brunch lobbyist, the idea of forking over $20 for a couple of eggs leaves a bad taste in the mouth that no bottomless-mimosa deal can wash away.

But even the most dedicated day drinkers can’t hold a candle to John Cheever, whose brunches consisted of “a secret slug of whiskey at eleven … two martinis at noon.” In his journals, Cheever’s infamous struggle with alcoholism plays out in the endless litany of gin and tonics, martinis, and nightcaps that make up his daily menu, starting well before noon. Food is an afterthought, usually appearing sandwich form. “I work until one, when I eat my sandwiches and take a rest,” Cheever wrote of his daily routine, a schedule that looks very virtuous when the drinks are edited out.

It wasn’t until Cheever moved to Los Angeles in 1960, to adapt D.H. Lawrence’s The Lost Girl for the screen, that he began taking an interest in food – both as a way to stave off depression, and because it was all conveniently paid for by the studio. “I’d reach for the phone and order the most elaborate breakfast I could think of,” he told The Paris Review, “and then I’d try to make it to the shower before I hanged myself.”

For Cheever, a native New Englander, Hollywood didn’t have much going for it, except where sandwiches were concerned. He recounts in his letters the discovery of a new sandwich, like a rare and exotic bird: “For lunch Carl had something called a Monte Christo sandwich. This is made of three slices of French toast, turkery [sic] meat between the toast, the top sprinkled with powdered sugar and the whole cut into three sections, each looking like a Napoleon. This is eaten with a knife and fork. And this is my only life in Hollywood note for today.” For a sandwich aficionado at the time, this was a moment of revelation. It is also, I hesitate to add, an ideal morning meal after a long night of drink.

The precise origin of the Monte Cristo has been lost to history, but here’s what we know: It’s a variation of the classic French croque-monsieur, a grilled-cheese-with-ham combo with a literary history of its own (it first popped up in Proust). The variation known as the Monte Cristo is rumored to have been invented in San Diego’s Coronado Hotel in the 1940s, although how it came from the bistros of Paris to the breakfast buffets of California is anyone’s guess.

The sandwich was popularized by the Brown Derby restaurant in L.A., where Cheever might very well have discovered it. You can find the first published recipe for a Monte Cristo in The Brown Derby Cook Book, which describes it much the same way Cheever does – with three slices of bread, dipped in batter, fried in butter, and served with jam.

This might sound like a heart attack waiting to happen (my mother, usually keen to try these recipes, heard the powdered sugar bit and and responded, “No … maybe? … but actually just no”). But, besides being an ideal hangover cure, combining French toast with grilled cheese finally solves the eternal brunch conundrum: sweet or savory? At last, we can have both at once.

1. Assemble the sandwiches: On 2 slices of bread, layer turkey, cheese, and apple to cover bread completely. Top with remaining bread. Secure each sandwich with toothpicks. Trim crusts, if you’d like.

2. In a shallow baking dish, lightly beat egg with a whisk. Add milk, and whisk to combine.

3. In a nonstick skillet over medium heat, add 1 tablespoon butter; swirl butter around pan until foaming. Coat both sides of the first sandwich in the egg mixture, then lay it in the pan, pressing down gently with a spatula to compact. After 3 minutes, flip sandwich and fry opposite side until golden brown. Remove from pan, and dry on a paper towel.

4. Repeat step 3 with remaining 1 tablespoon butter and second sandwich. Serve both sandwiches with sprinkles of powdered sugar on top.

For ease of frying, I suggest you start with 2 layers of bread for your first attempt and work your way up to 3 (or 4!). And – to appease my mother and get something fresh in here – I substituted apple for the more traditional jam.