My grandmother doesn’t eat cheese. If this seems like an incredible statement, prepare to be amazed: She also declines tomatoes, fresh herbs (?!), onions, garlic, and any “strong flavors.” It’s not that she’s allergic or intolerant; she just does not like these things. As someone who could live on pizza, in all its cheesy, saucy glory, I regularly puzzle over how these preferences came to be. Is it her German heritage? Was it a family tradition? Who determines what we eat?

Our tastes are being manipulated all the time: by our culture, which indoctrinates us; by our food systems, which dictate what’s available to us; by trends, which tell us that quinoa is in and rice is out. Most commonly, though, our tastes are formed by whoever is cooking for us. In Gertrude Stein’s household, that person was Alice B. Toklas.

“[Toklas] was a critic and connoisseur, more interested in preparing food, tasting it and passing comment on it, than in consuming it. … Stein’s appetite, by comparison, was prodigious,” writes Diana Souhami in her introduction to The Alice B. Toklas Cookbook. Alice cooked; Gertrude ate. “Alice is going religiously through all the cakes in the Austrian cook-book and then I have solemnly to decide the good and bad quality of the new one,” Stein wrote to Thornton Wilder, bravely taking on what must have been a punishing task.

But even as the official cake-tester, Stein had very little say in what got made. The daily menu was dictated by Toklas’ culinary experiments, and that meant French cuisine reigned supreme. “All of our French friends who had been in America had always said that the eating was inedible,” Stein wrote, and Alice had become similarly convinced. “[The French] bring to their consideration of the table the same appreciation, respect, intelligence and lively interest that they have for the other arts,” she wrote in her cookbook. (Toklas did, however, have a fondness for American gadgets, especially the Sunbeam Mixmaster, one of the earliest mass-produced electric mixers. “Alice all smiles and murmurs in her dreams, Mix master,” Stein wrote.)

The overwhelming influence of French food could have shaped Stein’s and Toklas’ our tastes for a lifetime … and very nearly did. When Stein embarked on an American tour in 1934, the first time in her native country in 30 years, Toklas (always Stein’s traveling companion) worried about the Americanness of the food; she even had a friend send a hotel menu in advance, to make sure there was something she could eat on the trip. But unlike my grandmother, the trip to the U.S. sparked Toklas’ re-appreciation of what was now a “foreign” cuisine. “The variety of dishes was a pleasant surprise. … Consolingly, there were honey-dew melons, soft-shell crabs and prime roasts of beef.” Stein was even more enthusiastic: she ordered the honeydew twice a day, every day.

There are only a few non-Frenchified recipes in Toklas’ cookbook, including the “haschich fudge” recipe from a friend that’s now her best-known creation. But there’s also a tribute to that melon, the ingredient that helped Toklas rediscover the American table. Much like the books we read, limiting our diet to the familiar can narrow our tastes, and our perspectives. But when we expand our consumption, we gain a capacity to appreciate difference in the world around us. Stein said it simply: “Books and food, food and books, both excellent things.” 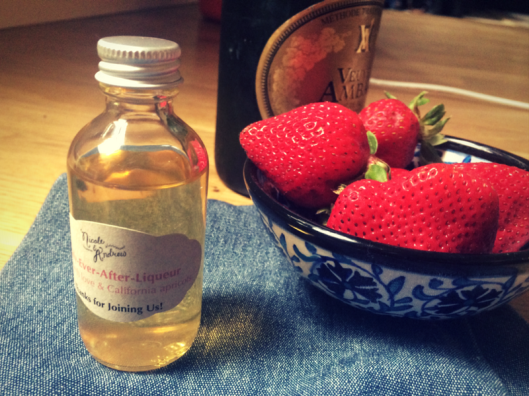 Toklas’ melon memories came from her childhood in San Francisco. One of the foundational recipes for her future sweet tooth was called “Scheherazade’s Melon.” It’s a bridge between her two cuisines, calling for honeydew (American) sweetened with sugar (American), doused in champagne (French) and apparently served to kids (very French).

The original recipe is preserved in the cookbook but is simplified here, mostly to call for fewer liqueurs; I used the original kirsch, plus my mom’s homemade apricot liqueur, which I had on hand from our wedding(!) last week. Reducing the alcohol content has a double bonus: You need fewer ingredients, and if you enjoy some fruit salad in the morning you’ll still be able to have a productive day.

Adapted from The Alice B. Toklas Cookbook

1. Cut melon in half and dice the flesh into 1-inch cubes, reserving any juice. Combine melon in a bowl with peach slices, strawberries and raspberries.

2. In a small bowl, whisk together honey, champagne and the liqueurs, until honey is dissolved. Pour mixture over the fruit. Refrigerate overnight.