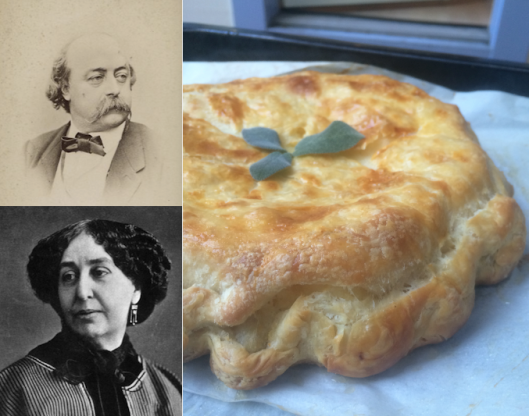 When asked “What famous writer would you invite to a dinner party?” famous wits like Oscar Wilde or Mark Twain definitely come to mind. But even the fictional dinner cast of my dreams pales in comparison to a real-life guest list: George Sand’s house parties in Nohant, France, in the 1860s and 70s. Balzac, Dumas, Delacroix and Chopin were a few of the mouths at Sand’s table. But one of her favorite guests was not only another giant of the arts, but her de facto gym buddy: Gustave Flaubert.

Although Sand loved to cook, she found herself with regular digestive problems, and kept trying different eating regimens in an attempt to find what would make her feel her best—an “elimination diet,” before they were cool. This included cutting out red meat, and occasionally trying vegetarianism. “In giving up trying to eat REAL MEAT, I have found again a strong stomach,” she wrote Flaubert. Her approach to cutting out alcohol was more moderate: “I drink cider with enthusiasm, no more champagne! … I live on sour wine and galette.”

Flaubert followed his friend’s lead; after all, a diet’s always easier when someone else is suffering with you. Guy de Maupassant, Flaubert’s protege, observed, “Almost never did he eat meat; only eggs, vegetables, a piece of cheese, fruit and a cup of cold chocolate … finding that too much nourishment made him heavy and unfit for work.” Flaubert and Sand would collaborate on their meal planning through their correspondence, sharing tips with each other. “I lunch on two eggs made into an omelet or shirred, and a cup of coffee,” Sand wrote.

Not only did the two writers share diet strategies, they also encouraged each others’ fitness habits. “I have followed your counsel, dear master, I have EXERCISED!!! Am I not splendid; eh?” Flaubert bragged in a letter to Sand—the 19th-century equivalent of posting your daily step count on Fitbit.

Despite living 300 kilometers apart, Flaubert and Sand would visit each others’ cities specifically to eat together. “I shall make a great effort and shall leave at eight o’clock Sunday, so as to lunch with you,” Sand would write. “When you arrive in Paris, give me a rendezvous. And at that we shall make another to dine informally tete-a-tete,” Flaubert encouraged.

“I don’t like to eat alone. I have to associate the idea of someone with the things that please me. But this someone is rare. … What is certain is that I experience a particular sentiment for you and I cannot define it.”The best thing about getting healthy with friends is that, even if your weight never budges, you’ve still spent many hours sharing meals with someone you love. 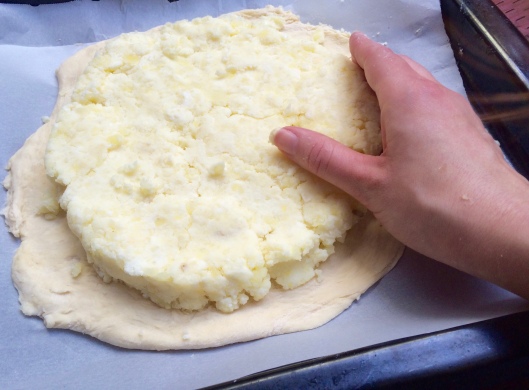 Although we’ll never be able to reproduce the guest lists at Sand’s soirees (at least not until zombie technology improves), we can make some valiant attempts to reproduce her dishes. Christiane Sand, the last descendent of George, collaborated with hospitality veterans Pascal Pringarbe et Muriel Lacroix to create A la table de George Sand, a collection of recipes that reflected the meals she prepared for her guests, children and grandchildren, as well as the regional specialties of Nohant.

Sand’s vegetarianism didn’t stick, but her love of galettes (and wine) did. This dish combines some of her and Flaubert’s mutual favorite foods: eggs, cheese and a little “vegetable” … if you count potato as a vegetable. Okay, so mashed potatoes in a flaky pastry crust might sound more like a Super Bowl dish than a diet food. But remember, this is France; with only one stick of butter, we’re having a pretty healthy day.

(Translated and adapted from A la table de George Sand)

1. On a clean surface, make the flour into a mound with a well in the center. Crack 1 egg in the well, along with a pinch of salt and 1 cup cold water. Knead the dough until smooth, and let sit 2 hours.
2. Put a large covered pot of water on medium-high heat. When water is boiling, add potatoes and cook until soft, about 10 minutes. Mash with a potato masher, then run through a fine sieve or potato ricer. Add to a large bowl with fromage blanc and gruyère, mixing well to combine. Season generously with thyme, salt and pepper.
3. While potatoes cook, roll dough to 1/4-inch thick. Cover half the dough with 1/4 of the butter cubes, then fold in half and roll out to the same thickness. Repeat with remaining butter, then chill in the freezer 30 minutes.
4. Preheat oven to 350°F. Cut dough into two 10-inch circles. Spread potato mixture on one circle, leaving a 1/2-inch border, then cover with second circle, crimping the edges closed.
5. Lightly beat the remaining egg in a small bowl and brush over top of the galette. Bake 30 minutes, until pastry is golden and potato is cooked.