There’s an old story in my family, one of those anecdotes that gets told to every dinner guest, about a Thanksgiving 25 years ago. A sleepy three-year-old me burst into tears in front of my dessert plate. When asked what was wrong, I sobbed: “I can’t decided whether to eat my pie or my ice cream first.”

I don’t cry about it anymore, but the weight of dessert decisions still bears heavy on my mind, especially when faced with the cornucopia of the holidays. It’s a feeling that might sound familiar to Almanzo in Farmer Boy, the second installment of Laura Ingalls Wilder’s Little House series. “When he began to eat pie, he wished he had eaten nothing else. He ate a piece of pumpkin pie and a piece of custard pie, and he ate almost a piece of vinegar pie. He tried a piece of mince pie, but could not finish it. He just couldn’t do it. There were berry pies and cream pies and vinegar pies and raisin pies, but he could not eat any more.” Do you eat your pumpkin pie or your custard pie first? It’s an impossible question.

My mom read the Little House series to me until I was old enough to dive into them myself, and (as many have noted) the food scenes still stand out—for good reason. Wilder was writing from her experience as a seasoned cook on her own farm, the basis for her books. “All the work of the farm centers in the farmer’s wife’s kitchen,” she wrote in an early column for The Missouri Ruralist, essays that germinated the idea for the children’s series. “[It] must be more than merely a kitchen. It is the place where house and barn meet, often in pitched battle.”

Wilder’s kitchen was a flurry of activity: “I skim milk, make butter, and cook bran mashes for the chickens and potato pairings for the hogs in mine,” she wrote. It also had to accommodate a variety of non-cooking uses. When re-doing the kitchen, her plans included storage for chicken feed buckets and pigs’ swill. The entire budget for her kitchen renovation? $49.84. HGTV would have a heart attack.

On the farm, multiple dessert options wasn’t a problem—it was a necessity, in order to make it through a physically-demanding workday. Rose, Laura’s daughter, described her father’s typical breakfast: “Here are bowls of oatmeal, with whole pints of cream, large dishes of baked apples, the big blue platter full of sizzling ham, with many eggs disposed upon it; here are hot cakes piled by the tens and dozens, with melting butter and brown sugar between them, and hashed brown potatoes, Graham bread and white bread, fresh butter, honey, jam, milk and the steaming pot of coffee. Here are doughnuts or gingerbread to accompany the coffee cups’ second filling.”

One way to solve the problem of what to have for dessert is simply to have it at all times of day;on the prairie, instead of being seen as a sweet, gingerbread served year-round alongside the main meal, like a side of cornbread, as an aid to digestion. But Almonzo Wilder went a step further, embracing the idea of dessert for breakfast with “just one medium-size wedge of apple pie to top off the meal and finish the foundation for a good day’s work.” At this time of year, we’re all Farmer Boys at heart; when we begin to eat pie, there’s no stopping us. 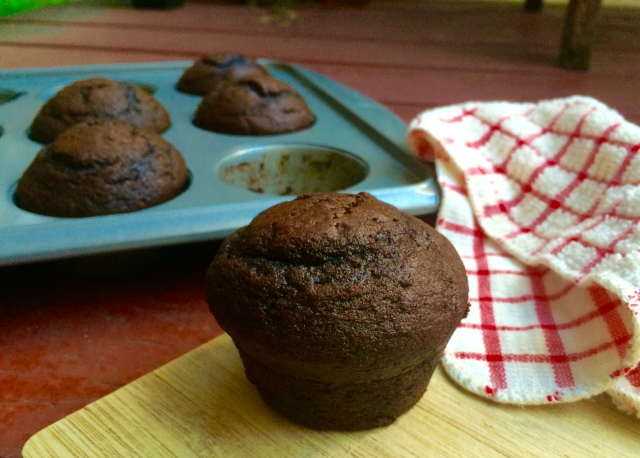 If your copies of the Little House series have also been drooled over, you’re in luck: Wilder immortalized those dishes in The Laura Ingalls Wilder Country Cookbook, which gathered her recipes from the 1930s and 40s. Gingerbread is one of the book’s star dishes, which, according to Rose’s example, you could enjoy for breakfast if you choose. Wilder does say, though, that “chocolate frosting adds to the goodness,” which puts it more squarely in the dessert camp.

While Wilder’s gingerbread recipe survives, there’s no recipe for her chocolate frosting. I used a classic boiled chocolate icing, the kind everyone’s grandmother used to make, which might have been familiar to her as well. Serve with vanilla ice cream—if you can decide whether or not to eat it first.

1. Preheat oven to 350 degrees F. Grease a 8-inch square, 9-inch circular pan, or 12 cupcake tins.
2. In a medium bowl, cream together the sugar, shortening and molasses.
3. In a large bowl, mix flour, spices and salt. Add in the wet ingredients and stir to combine.
4. Dissolve baking soda in 1 cup boiling water. Add to the batter, then add eggs. Mix well and pour into prepared pan.
5. Bake 45 minutes, or until a tester inserted into the center comes out clean.

1. In a saucepan, combine sugar and cocoa together. Place over medium-high heat and add milk, a little at a time, then add butter. Stir until sugar is dissolved.
2. Bring to a boil and cook 6 minutes, then remove from heat. Stir in vanilla and let cool.
3. Whisk vigorously until creamy.