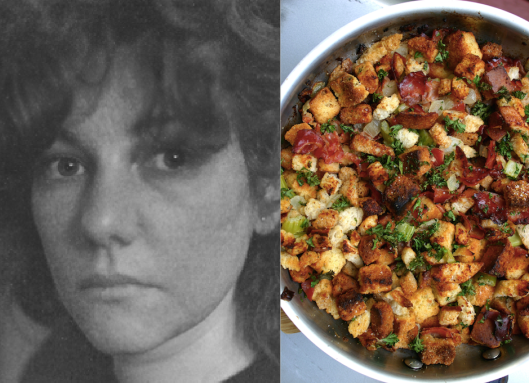 Let’s play a drinking game: Find a restaurant or cookbook review and take a shot every time these words come up: delicious, exquisite, velvety (for soups), pillowy (for gnocchi), complex, simple, seasonal. Drunk yet? Certain food words and phrases get more than their fair share of column space—so much so that, despite being guilty many times over, I still cringe when another squash soup is described as “autumn in a bowl.”

That’s why, although I’m usually focused on food in fiction (and the authors who ate it), I have a special respect for those writers who make food their lifelong subject. It’s easy to polish the perfect dinner party scene in a novel when there’s only one to write. But describing dish after dish, new “modern American small plates restaurant” after restaurant, and turning each into its own reason for being? That’s what separates the laymen from the legends. For many, that legend is M.F.K Fischer. For me, it’s Laurie Colwin.

A fiction writer herself (of both short stories and novels), Colwin’s essays on food for Gourmet are what gained her celeb status—and a passionately devoted readership. After her early death at 48, the magazine received hundreds of letters expressing their grief. When she took over as editor, Ruth Reichl remembered, “Every writer that came in said that he or she wanted to be the next Laurie Colwin.”

Colwin’s one-liners made her the Dorothy Parker of food (“Grilling is like sunbathing. Everyone knows it is bad for you but no one ever stops doing it.”) She would never call a soup velvety; instead, she’d describe the desultory chive sitting in it. But more than her wit, readers loved Laurie for ‘fessing up to all our guiltiest kitchen thoughts, without fear or shame. After throwing dozens of dinner parties in her tiny Manhattan apartment, she’d been there: from cooking five courses on a hot pot to secretly wishing your dinner guests shut up and just ate meat already. Every unglamorous food frustration you’ve had? Laurie understood.

Home Cooking, a collection of Colwin’s essays, was released in digital form for the first time this month and I’ve been revisiting them as preparation for the kind of big dinner that always comes this time of year. (Spoiler: I have a copy to give away!) As with any contemporary book of food essays, there are recipes, and they’re simple, seasonal and (yes, I’m saying it) delicious.

But it’s the moral support, the tableside pep talk, that makes it a kitchen essential. “No one who cooks cooks alone. Even at her most solitary, a cook in the kitchen is surrounded by generations of cooks past, the advice and menus of cooks present.” Colwin is one of those kitchen guardian angels, peering over your shoulder when your sauce splits or your soufflé falls flat, telling you not to worry—and gently reminding you that, in a pinch, there’s always takeout. 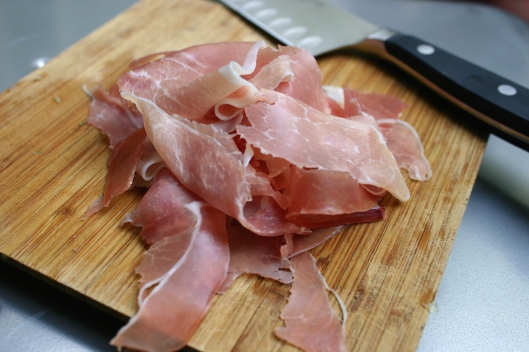 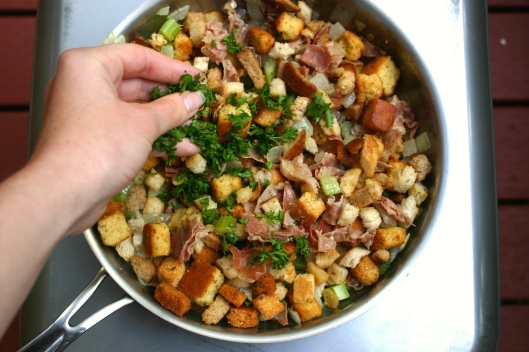 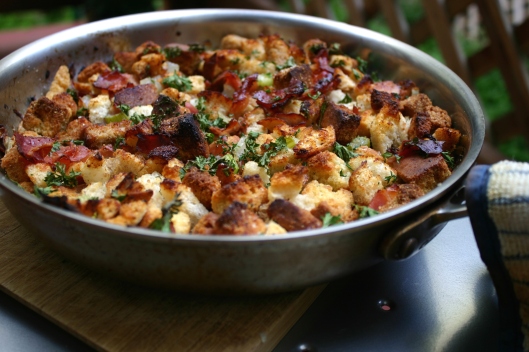 Like her writing, Colwin’s cooking is idiosyncratic; there’s no mistaking her taste. Everything could be made better, her recipes suggest, with some chopped up scallion and dill. Some dishes are just plain perplexing; she describes a lemon tart as looking like “a baked hat” and tasting like “lemon-flavored bacon fat” … yet she ate most of it. But maybe most baffling is her dislike of stuffing—baffling, that is, to everyone but me.

For the first 20 years of my life, stuffing was the unloved stepchild of the Thanksgiving table. The turkey soaked up all the time and attention on the big day, and sides and desserts were painstakingly selected weeks in advance. But stuffing preparation took virtually no time or effort: My dad took a bag of stuffing mix and plopped it in the microwave, where it congealed into a bread mass that was paradoxically both soggy and hard. It sat awkwardly on the table, among a mosaic of superior dishes, as an offering to some tradition we didn’t really understand.

Understandably, I didn’t begin to love stuffing until I went to other families’ Thanksgivings and saw the myriad variations on a beloved theme: chestnuts and apples in New York, rice dressing and sausage in New Orleans. Colwin was eventually convinced too, and with this recipe I can see why. It’s not fussy; you can imagine her making it on her two-burner stovetop. But it feels just right—and in classic Laurie style, you’re allowed to take shortcuts, with no shame.

GIVEAWAY: I have a digital copy of Home Cooking from Open Road to give away! Enter in the comments and I’ll announce a winner on December 8.

(from Home Cooking by Laurie Colwin, Courtesy of the Colwin estate)

1. Make a rich stock out of the giblets, wing tips and neck (if you can stand not to roast it) of the turkey, along with some chicken parts and an onion. Let simmer for several hours.

2. Melt a stick of butter in a large saucepan and add two diced medium-sized yellow onions, one leek (white and tender green part) also diced, one fat clove of garlic, minced. Wilt these in the butter.

3. Add 1/2 pound of diced prosciutto (for people who do not eat pork products, dried funghi porcini and toasted pecans make an admirable substitute) and saute briefly.

5. Moisten with broth until fluffy but not wet. This is enough for a seventeen-pound turkey with some left over to cook in a pot as a side dish.

28 thoughts on “Laurie Colwin: Cornbread and Prosciutto Stuffing (and Giveaway)”