Although it’s conspicuously absent from biology classes and science textbooks, I’m convinced that certain humans (myself included) have developed a rare but necessary extension of the digestive system: the “dessert stomach.” How else to explain our ability to be simultaneously completely full of dinner, but so ready for the final course? Friends with actual medical training tell me it’s all psychological, but I’m going with the two-stomach theory.

After all, the evidence goes back hundreds of years, to the New England table of Nathaniel Hawthorne. When you look at the dinner party guest lists now, they read like a survey of American literature—Emerson, Thoreau and a young Louisa May Alcott might be spotted, digging in—but the food was just as important as the company. “Should we be the more ethereal, if we did not eat?” he wondered in a letter. “I have a most human and earthly appetite.”

Even after those elaborate meals, though, Hawthorne could always find a little extra room when the main courses were cleared. Writing to his son after a particularly overwhelming feast, he admitted, “I had hardly any appetite left.” Nevertheless, “I did manage to eat some currant pudding, and a Banbury cake, and a Victoria cake, and a slice of beautiful Spanish musk-melon, and some plums.” If Hawthorne came to your Thanksgiving, he’d be the guy “testing” every kind of pie on offer (and don’t forget the ice cream).

Fruit was a frequent after-dinner treat, and Hawthorne doted on the orchards on his land (“What is a garden without its currant-bushes and fruit-trees?” he wrote). But, as anyone with a dessert stomach can attest, fruit alone isn’t nearly enough. After his daily walk through the grounds, Hawthorne would eat “a pint bowl of thick chocolate (not cocoa, but the old-fashioned chocolate) crumbed full of bread.” When fruit was in season, he’d add it to the mix—a stealth move to combine two desserts in one. 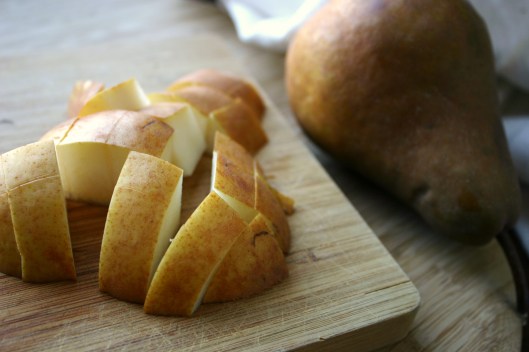 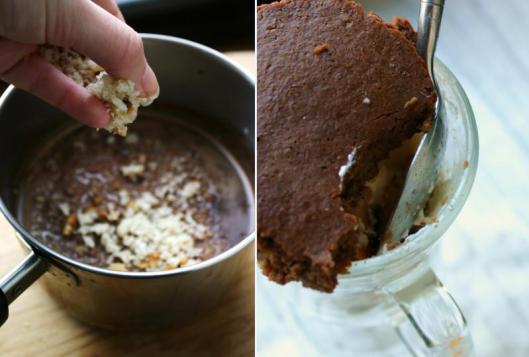 Although I’m completely pro-Hawthorne on the multiple dessert front (my own menu for tonight’s course included cake, fruit, yogurt, candied almonds and peanut butter M&Ms), chocolate with breadcrumbs didn’t sound like a must-try. But thanks to Food Timeline, I discovered that 18th-century recipes for “chocolate puddings” were basically just that: chocolate, milk and bread crumbs. Baked in a moderate oven, the combination becomes a deliciously smooth bread pudding.

Nathaniel and Sophia Hawthorne’s first house as newlyweds boasted apple, plum and pear trees (not to mention a vegetable garden, planted as a wedding gift by Thoreau himself). While Louisa May Alcott cherished the apples in her backyard, Hawthorne spoke most highly of his pears and plums. Stack them with layers of pudding and cream in this trifle—either in a dainty glass or, in true Hawthorne style, a hearty pint bowl.

1. Preheat oven to 350, positioning racks in the top and bottom thirds. In a double boiler, scald milk, then add granulated sugar and stir until dissolved. Remove from heat and add chocolate, stirring constantly, until smooth. Add bread crumbs to the milk and sugar mixture and allow to soak until bread is soggy.

2. Add the chocolate mixture to food processor with eggs, vanilla and salt. Pulse until well blended; pour into a greased 8×8 pan. Set the pan inside a roasting pan filled an inch of water. Bake, on the top rack, 50 minutes to 1 hour.

3. Meanwhile, in a medium bowl, combine lemon juice, brown sugar, cinnamon and ginger. Add pears, stirring to coat in the sugar mixture. Roast on the bottom rack of the oven, 30 minutes.

4. When pudding and pears have cooled 20 minutes, assemble the trifles: Layer pears, pudding and whipped cream in glasses, mugs or deep bowls, with a big helping of pudding to top it off.