When I was a kid, I hated lamb. Well, let me clarify: My mother hated lamb, so I hated lamb. I had never actually tasted it, since it was barred from our home, but that was entirely irrelevant to my 10-year-old self. My mom seemed to be right about everything else, so why would she be wrong about lamb?

It wasn’t until I moved away—with an apartment of my own and a boyfriend who tore into lamb like a rabid chupacabra—that I actually took a bite. It was at an Indian restaurant, another territory where my family had always been cautious. We’d consider the menu at length: lots of thoughtful nodding with a smattering of “hmm”s. Then we’d order the same chicken tikka masala and garlic naan we always did.

Allen Ginsberg had our number. Traveling around India in the 1960s, practicing Buddhism and Krishnaism, Ginsberg was eager to bring his new lifestyle to the States. He had just one concern, he told Hare Krishna founder A.C. Bhaktivedanta Swami Prabhupada. Could Americans handle the food?

Although Ginsberg seems skeptical that potential converts could handle the Hare Krishna diet, he was a culinary adventurer himself. In his letters, Ginsberg lists dozens of local delicacies he sampled over the course of his wanderings, like a beat-poet Anthony Bourdain. In Hong Kong, he recommends the 100-year eggs; in Korea, try the snail and cuttlefish dish; in Denver, check out the all-organic Mercury Cafe (where you could catch him singing the occasional set with his rock band).

But even Ginsberg had his own culinary prejudices to overcome. In a letter to the poet Gary Snyder, he expressed surprise at how well he ate in India. “Food quite good … Bombay has great food all over. I’ve even drunk water practically all over and not been bugged. And everybody tells me it was instant death.” 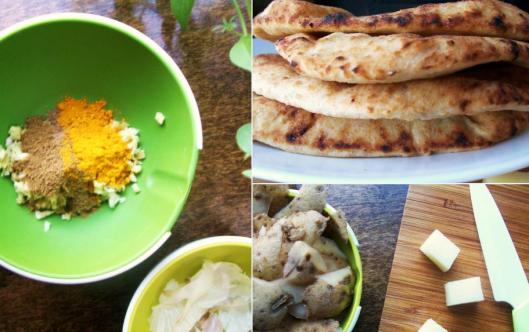 Those “curried vegetable dishes” might not have tempted the chicken tikka devotee I was at 10. But as a newly minted New Yorker, with no job but a problematic rent check due every month, they had one massive advantage. They’re cheap.

This was not lost on Ginsberg. “The cheap food – 15 cents a huge vegetarian meal – I’ve lived on for weeks at a time,” he wrote. Aloo gobi is the ideal dish for the cash-strapped beatnik: Buy a few potatoes and a head of cauliflower, and you have sustenance for several days of poetry readings. “Food makes a difference in physical and mental states after all,” Snyder told Ginsberg. I didn’t need to be a Hare Krishna to tell you that.

1. With a mortar and pestle, mash ginger, garlic, ground coriander, cumin and turmeric into a paste. In a small bowl, combine paste with 1/2 cup water.

4. Remove lid and add salt. Continue to cook, uncovered, until cauliflower and potatoes are tender, about 5 minutes. Garnish with fresh coriander and serve with paratha or naan.