“I had a birthday – only a few days ago – and am now thirty-eight,” wrote Robert Penn Warren in 1943. I’ve had birthdays on the brain, having also celebrated one recently. It wasn’t a big, round number, but it was a perfect square, the mathematics of which somehow seem especially daunting. It’s that age when we’re expected to put away childish things and start careers, find ourselves, tie the knot, settle down, paint the nursery, take out a mortgage. Instead of doing those things, I started this blog.

Clearly, a cocktail was in order. Luckily, Warren had just the thing.

Although it doesn’t have the universal significance of a 30th or a 40th, Warren’s 38th birthday was actually a very noteworthy one: It meant he could no longer be drafted into World War II. To celebrate, Warren threw “a gentlemen’s party with a particularly insidious punch” and invited his colleagues from the University of Minnesota, where he directed the creative writing program. If you think tenured professors don’t know how to party, think again: The revelry lasted almost seven hours, and they went through four gallons of punch.

If Warren’s parties were anything like his letters, they would have been a wickedly good time. Biding his time before At Heaven’s Gate to be published, he was full of writerly gossip, from who was a hack to who just got thrown in prison. He hates on the Chicago Tribune (“the world’s stinkingest paper but pays well”) and gives begrudging praise to The Nation (“doesn’t pay well but … is respectable”). August Strindberg and William Somerset Maugham? “Pure horse droppings.”

I can only imagine what bons mots Warren, on a little too much punch, might have dropped at his birthday shindig. He claimed that “high aesthetical conversation raged until a late hour,” but later dropped the act and just admitted the discussion was “more noise than wit, but the noise sounded like wit at the time.” It’s easy to take yourself too seriously as major birthdays loom, which might be why so many grown-ups have such dull parties. But Warren shows it doesn’t have to be that way. Just mix a group of good friends, a lot of noisy laughter, plus a glass of something delicious to wash it all down. 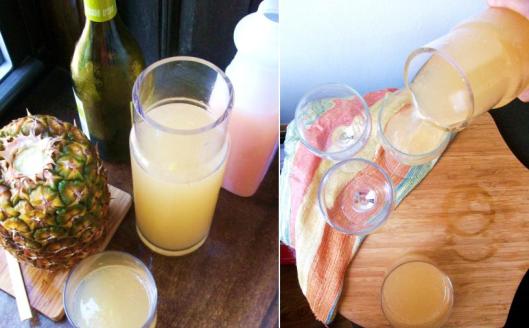 Fortunately, we don’t have to guess at the ingredients in Warren’s birthday drink of choice, since he was very proud of his concoction and wrote about it to several friends. “Here is the recipe: 1 quart sauterne, 1 quart gin, 1 pint rum, 1 half-pint sherry; 1 pint grapefruit juice; enough pineapple juice to sweeten to taste; 1 large cake of ice.”

There’s a reason they call drinks like that a punch: One glass is enough to knock you over. “It has the mildest flavor in the world, but, since you know the recipe, it is superfluous for me to point out that it is not for the women and children,” Warren wrote. It also makes enough to put the whole U of M faculty away for an evening.

For a smaller dinner party, or for less thirsty guests, here’s a slightly adapted version, with a bit more juice to mask the wallop of the gin. Proceed with caution, especially if you have class the next morning.

Error: Twitter did not respond. Please wait a few minutes and refresh this page.