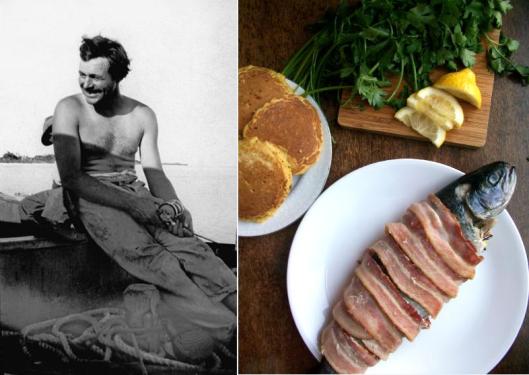 Were you expecting a stiff cocktail? Fresh marlin? Braised wildebeest? Ernest Hemingway has become such a legendary character, it’s hard to think of a recipe that could match his macho reputation. It’s clear that the man loved food; A Moveable Feast is one of the most sincere odes to eating I’ve ever read. But did Hemingway cook?

Whether on a Cuban beach or the African savanna, Hem was a fan of the good life – and that included making good food. “It is all right to talk about roughing it in the woods. But the real woodsman is the man who can be really comfortable in the bush,” he wrote in an essay on camping for the Toronto Star.  As a kid, Hemingway spent many summers hiking through Michigan, and his ideal meal was a freshly caught fish. But most of his fellow outdoorsmen didn’t know their way around a griddle. “The rock that wrecks most camping trips is cooking,” he griped. “The average tyro’s idea of cooking is to fry everything and fry it good and plenty.”

As a solution, he proposed a simple but satisfying meal for any campfire cook. Trout was a favorite for Michigan fishermen, but it can dry out easily. So Hemingway suggested cooking it in layers of bacon, whose fat bastes the fish as it renders. “If there is anything better than that combination the writer has yet to taste it in a lifetime devoted largely and studiously to eating.”

Of course, sometimes the hardest part of cooking isn’t preparing the meal itself – it’s waiting for it to be done. Hemingway saw that coming, too. He recommended whipping up a batch of pancakes to serve before the main course, to satisfy any unhappy campers. 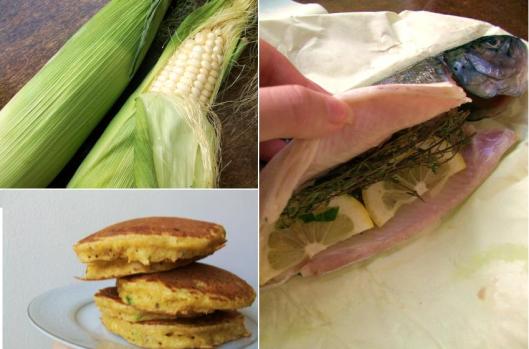 Because he was cooking over a campfire, Hemingway called for pan-frying the trout over hot coals. “Put the bacon in and when it is about half cooked lay the trout in the hot grease, dipping them in cornmeal first.” he wrote. “Then put the bacon on top of the trout.”

But for those of us in the comfort of our own kitchens, there’s a better way: Look to the broiler. Broiling the fish not only keeps the bacon crispier than the Hemingway method, it also gives you the freedom to step away from the kitchen for a few minutes while it cooks. After all, a writer who couldn’t be tied down to one continent – or one woman – certainly shouldn’t be a slave to a sauté pan.

1. Preheat broiler and set oven rack 4 to 6 inches from heat. With a paper towel, pat trout dry inside and out. Dredge outside of each fish in cornmeal, then season cavity with salt and pepper. Place 4 sprigs of thyme and 2 lemon slices inside each fish.

2. Wrap 3 bacon slices around the middle of each fish, so that the edges overlap slightly. Line a roasting pan with aluminum foil, and place fish on pan. Broil until bacon is crisp, about 5 minutes. With a spatula, carefully flip fish over and cook another 5 minutes, until flesh is firm.

3. Coat a large skillet or pancake griddle with oil. Over medium heat, spoon batter onto pan in 1/4 cups and fry until cakes are golden on both sides, 1 to 2 minutes per side.