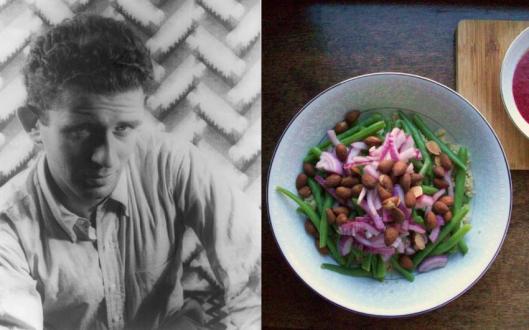 In his famous appearance on The Dick Cavett Show, after headbutting Gore Vidal backstage, Norman Mailer humbly referred to himself as a “dizzying intellect.” I’ll leave that literary debate to his critics, but at least in the kitchen, Mailer was a thinker.

In his semi-recent memoir, Dwayne Raymond discusses his firsthand experience with the giant brain; he helped research Mailer’s last novel, The Castle in the Forest, but also served as confidant, tech support, chef, and guinea pig for some of Mailer’s more unique food creations.

Mailer theorized on food like a man obsessed. Occasionally this would manifest itself in more compulsive ways, like meticulously cutting a grapefruit in exactly nine sections. But you could see it more often in his pursuit of the culinary Shangri-La: a recipe that would maximize flavor, nutrition, and integrity of the ingredients all in one.

Not that these concoctions were necessarily successful. Case in point: a ghasty-sounding salad made of green beans and teriyaki-infused oatmeal (to lower cholesterol). Another “experimental” salad recipe involved the addition of Häagen-Dazs Raspberry Sorbet to a vinaigrette. “It didn’t occur to him that the whole concept was dreadful; that wasn’t the way his mind worked,” Raymond writes. “Norman believed that anything awful could be fixed if enough work was put into it.”

In that spirit, I decided to take on an awful-yet-fixable dish. Re-enter the green bean and oatmeal salad.

The idea of oatmeal in a salad seems “healthy” in that sorrowful, “do I have to?” kind of way; you just know it is either going to be bone dry and flaky or turn into a mushy glop as soon as it encounters a liquid.

That’s when I turned to quinoa. Mailer died just before the grain made it big in the U.S. (Martha Stewart now lists recipes for quinoa muffins, burgers and even pie), but I think it would have satisfied his criteria. Taste? Check. Structural integrity? Check. Nutritious? Check – and lowers your cholesterol to boot. Add some raspberry and Mailer would have something to consider. I left the Häagen-Dazs in the freezer.

(Created with inspiration from this and that)

1. Slice onion into thin half-moons. Combine vinegar, 1/4 cup water, 1 tablespoon salt and the sugar in a small bowl. Add onion and set aside, 30 minutes to an hour.

2. Heat 1 tablespoon oil in a small saucepan over medium heat. Add quinoa and toast until lightly golden, about 2 minutes. Add 1 3/4 cups water and bring to a boil. Reduce to a simmer and cook, covered, until water is absorbed, about 15 minutes. Let stand 10 minutes, then uncover and fluff with a fork.

3. Meanwhile, bring a large pot of salted water to a boil. Add green beans and cook until just tender, about 4 minutes. Drain and rinse in very cold water.

5. Add raspberries to the reserved picking liquid and macerate with a fork (a muddler also would come in handy here, for you bartender types). In a small stream, add 1/4 cup oil and whisk until combined. Pour vinaigrette over salad and toss to coat. Season with pepper to taste.