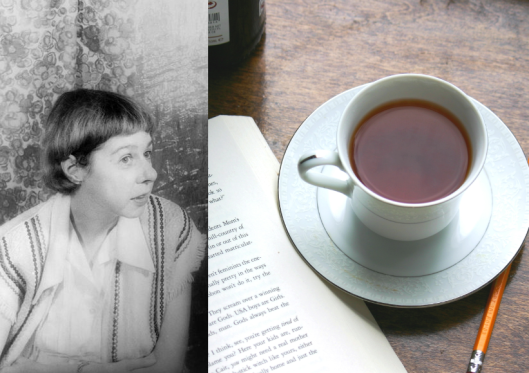 If you’ve ever lived with roommates, you know that the kitchen can be a dangerous place—and not because of the sharp objects. Battles in the tiny kitchens of New York are usually fought on a more passive-aggressive level, tearing apart even the closest of friends: skirmishes over fridge space, scuffles over stolen food, brawls about dishwashing duty.

That’s what happened in Brooklyn in 1940, when a motley crew moved into a dilapidated brownstone at 7 Middagh Street: poet W.H. Auden; playwright Jane Bowles; her husband, Paul; and Carson McCullers, whose debut novel The Heart Is a Lonely Hunter was the blockbuster book of the summer. Add composer Benjamin Britten and burlesque artist Gypsy Rose Lee, and you had a very eclectic roster of roommates—none of whom was particularly interested in doing the dishes.

Which isn’t to say they didn’t create enough of them. McCullers was the de facto chef of the house, though her signature dishes left a little to be desired. According to a biography by Virginia Spencer Carr, The Lonely Hunter, McCullers’ specialties included “canned green pea soup enlivened with small chunks of wieners, and a unique dish which she labeled ‘spuds Carson,’ made with creamed potatoes, ripe olives, minced onions, and grated cheese.” Recipes were something McCullers “preferred to talk about, to envision the results rather than to actually cook them.” In other words, she improvised.

Instead, McCullers devoted the majority of her attention—and budget—to drinking. While living with her first husband, Reeves McCullers, she splurged on gallons of sherry, while dinners consisted mainly of eggs, bread and milk. By the time she moved to Middagh Street, McCullers still didn’t have recipes for actual meals, but she did have her signature drink down: a mix of hot tea and sherry, which she called “sonnie boy” and kept in a trusty thermos. She and the thermos were soon inseparable (there’s a picture of the two of them in The Lonely Hunter, with McCullers looking much happier than she did with the husband).

McCullers’ dubious skill in the kitchen was matched by her disregard for cleaning it. She would often forget about things on the stove, and return to find dinner burnt to a crisp, stuck to the pan. Visitors noted that “many of her pans, with remnants of charred food in them, were in soak on the kitchen floor.” This didn’t go over too well with the roommates—particularly Auden, the den mother of the group, who was in charge of both mealtimes (breakfast at 9 a.m. sharp.) and toilet paper patrol (one square per flush).

In his 1941 poem “New Year Letter,” Auden praises the merits of routine, work hours and regular meals. He doesn’t mention clean dishes, but you have to wonder if living with McCullers prompted the rant. Does a clean house really inspire creativity? Or is the cleaning just a distraction from inspiration itself? It’s an ongoing roommate debate—and if you live with a writer, one that might just be immortalized in verse, for future generations to read. 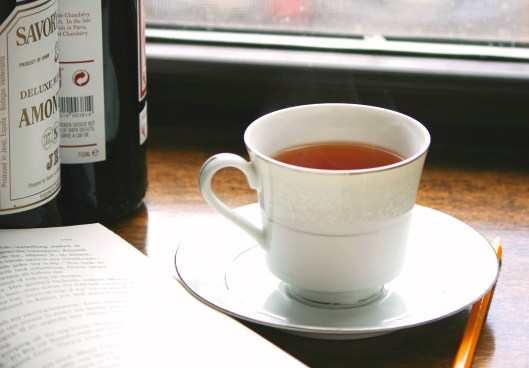 Who knows whether good roommates really make good writers, but McCullers’ friends knew what inspired her: that trusty thermos. At the artists’ community Yaddo, where McCullers was a resident, alcohol was rumored to be an integral part of her creative process; she “had to be a little high to work,” a colleague said. This dependence became more pronounced as time went on. Rather than rely on the thermos, she diversified, starting the day with a beer, continuing with the sherry/tea mixture, and rounding out the day with a bourbon or two.

But sherry was never forgotten; wherever McCullers was, it followed—usually in large quantities. Jordan Massee, a cousin of the writer’s, described the impressive aftermath of one night of revelry: “There were so many bottles and so cheap–$1.98 a gallon–that I was embarrassed to set them out in the street early for the garbage collection.”

If you have a cheap bottle of dry sherry, mixing it with tea (try a citrusy brew like Bigelow Lemon Lift) is an easy way to cut the sweetness; adding a healthy squeeze of lemon is even better. Although McCullers drank “sonnie boy” both hot and cold, I prefer it as an alternative to a hot toddy: a warming way to end a rainy day—or, if you’re McCullers, to begin it.

Brew tea to desired strength and add sherry. Stir and serve with lemon wedge, or pour into a thermos for a drink on the go.