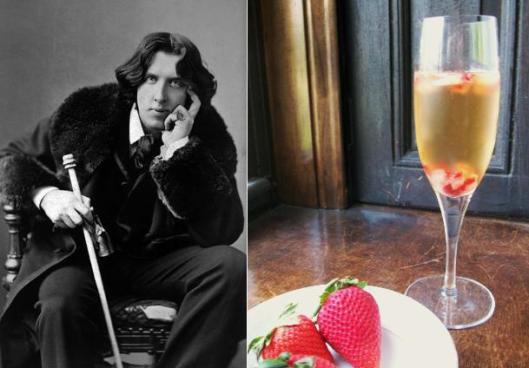 If I’m having a drink on a typical day, I’ll probably spring for a martini. On a tough one, give me a bourbon on the rocks. But when I’m feeling fancy, it’s always Champagne. Oscar Wilde must have been feeling fancy all the time.

It’s not a big surprise that one of the most famous dandies of literature had a serious Champagne fetish. But the lengths to which Wilde went to get his fix takes bubbly worship to a whole new level. At the best of times, there were elaborate champagne dinners … and pre-dinners and post-dinners; Wilde ordered his staff to serve champagne “at intervals” throughout the day. And at the worst of times – after being imprisoned for charges of indecency and sodomy – Wilde made the most of things by ordering cases of his favorite vintage, an 1874 Perrier-Jouët, straight to his cell. It even came up in the courtroom, according to the transcripts of his trial:

Wilde’s taste for Champagne has become so legendary that it threatens to outstrip the truth. In a famous anecdote, Wilde was elegant until the very end, ordering champagne to his deathbed and sighing, “Alas, I am dying beyond my means.” But other accounts are a little less romantic – turns out, he may have just been thinking about his hospital bill. 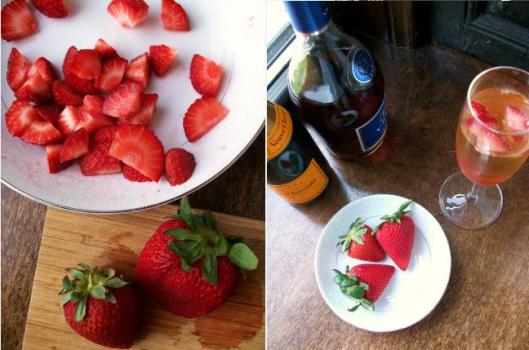 In John Betjeman’s poem “The Arrest of Oscar Wilde at the Cadogan Hotel,” Wilde was drinking a hock and seltzer when the police came for him. A throwback made with white wine and soda, it’s a drink that the hotel still serves today. But  it also serves a variation of this champagne cocktail, in honor of Queen Victoria. And to me, any cocktail made with Wilde in mind has to have some of his signature fizz.

If you’re sipping Perrier-Jouët or Dom Pérignon, adding anything else seems extraneous – why mess with a good thing? But adding a splash of cognac and a bit of sweetness turns regular Champagne days (and since this is Wilde, we’re talking every day) into special occasions. Plus, the strawberries in this cocktail add an extra Wildean touch: the right color. According to the Cadogan, Wilde liked his Champagne pink.

1. In a small bowl, combine diced strawberries and sugar. Let sit 1/2 hour, then muddle with a muddler or a wooden spoon (the back of a fork works in a pinch).

2. Add cognac to the muddled strawberries, then pour the mixture into two Champagne flutes. Top with champagne and garnish glass with an extra strawberry, if desired. Toast yourself for a job well done.