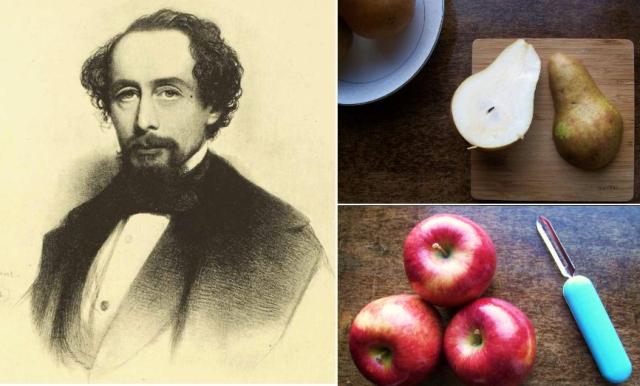 Thinking of Dickensian food conjures up two extremes – the stuffed goose and figgy pudding feast of A Christmas Carol and the sad gruel rations of Oliver Twist. During Dickens’ 200th birthday celebrations this month, there was a lot of talk of the former. Nobody seemed as excited about the gruel, but there are plenty of resources to help you make an authentic Victorian version that actually sounds kind of great (Favorite BBC quote: “We were hoping he’d make it far more disgusting.”)

Given the fame that Dickens achieved in his lifetime, he didn’t have to beg for second helpings. But one of his favorite dishes, baked apples, was quite simple, not to mention practical: He swore by their ability to prevent seasickness.

Dickens became a baked apple convert while sailing to Boston in 1867. They were served at every meal during the Atlantic crossing, and he always helped himself. “I am confident that they did wonders, not only at the time, but in stopping the imaginary pitching and rolling after the voyage is over,” he wrote to his sister-in-law, Georgina Hogarth.

The magical apple diet clearly made an impression, and in 1881 Charles Dickens Jr. dedicated an entire cookery column to them in Household Words, a revived version of his father’s weekly magazine. Apples were getting cheaper and were beginning to be imported from abroad, so baked apples could be made by anyone, anytime. Perhaps thinking of his father, Dickens Jr. stressed the health benefits of the fruit. “It is unnecessary to say how valuable apples are as an article of diet.” Turns out, Dickens had been on the edge of a trend: The earliest version of our famous “An apple a day” saying was first published in Wales in 1866, just a year before his trip to the States.

Besides some basic instructions for your traditional baked apple, Household Words lists recipes for apple cake, apple rice pudding, and “apple fool” (an apple custard). But apples à la princesse called my name. These apples are baked in a sherry bath (which sounds kind of like a royal treatment, or like being at a spa for lushes), then filled with a fruit jam and drizzled with sherry syrup.

I like a little cinnamon with baked apples, so I made a spiced pear butter, rather than the apricot marmalade that Dickens Jr. suggests. I don’t know if he would have approved of the substitution; he clearly thought pears were a lesser fruit, “most useful by way of change for children.” What can I say? I’m a kid at heart, at least if you judge by my produce preferences.

1. Combine pears and sugar in a large pot and stir to coat. Cook over medium heat until fruit is tender. Mash with a potato masher or the back of a fork until fairly smooth.

2. Add cinnamon, cloves, and lemon juice. Cook, stirring often, until the mixture has thickened and does not run when tested on a chilled plate, 1 to 2 hours. Remove from heat and eat within a week, or can whatever isn’t gobbled up.

2. In a small saucepan, combine water and sugars, stirring until dissolved. Add sherry and lemon zest and cook another 3 minutes. Pour sherry mixture into a deep baking dish (I used a 9×5 loaf pan).

3. Add apples to the baking dish and cover with an oven-proof plate or aluminum foil. Bake until apples are tender, but not broken, about 1 hour. Transfer apples to plates or a serving tray and fill cavities with pear butter.

4. Boil remaining sherry liquid in a small saucepan until reduced by half, then let cool. Drizzle this syrup over apples, sprinkle with brown sugar and serve immediately.