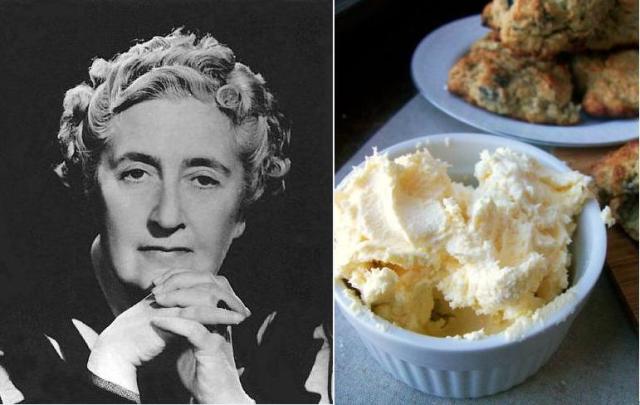 Certain foods defy any attempt at portion control. Think chocolate chips, or those disturbingly addictive pretzel pieces that must be flavored with some kind of stimulant in addition to the honey mustard. I have such a Cheez-It obsession that, studying abroad in Paris and unable to find them in any grocery, I ordered three boxes online in a hunger-fueled panic. My host mother – who, in typical French fashion, served perfectly portioned meals on an adorable tea tray – brought the package to my room with a look of pure horror. I guiltily ate a whole box as soon as her back was turned.

But Agatha Christie clearly felt no such shame when it came to her food addiction: She loved cream, and all of Devon county knew it. “Agatha was very fond of food – she was passionate about cream,” the local vicar’s daughter remembered. “She would have it by the cupful. She would have a cup of cream by her typewriter.” Even Christie’s fictional characters couldn’t escape the obsession. Miss Marple is similarly famed for her love of cream, and even the picky Hercule Poirot partakes.

Christie made minor attempts to curb her appetite, to no avail. “She used to drink cream from a huge cup with ‘Don’t be greedy’ written on the side, an injunction she never showed any sign of obeying,” her grandson Mathew recalled. Frankly, I think that anyone who has a designated cream-sipping cup is fighting a losing battle with willpower, but I’m the one with a personal bag of chocolate chips in the pantry, so who am I to judge?

There was only one person who had control over Christie’s dessert intake: her butler. George Gowler oversaw the elaborate two-hour dinner parties at Greenway, Christie’s country estate. But instead of letting her choose the menu for the final course, Gowler would randomly assign everyone a different plate of fruit – a game of dessert roulette – allowing guests to choose their favorite dish only once a week. Christie’s favorite was fresh figs, which you can still sample from the trees she grew at Greenway. But beware if you encounter them in one of her mysteries: One unlucky lady who indulges in Syrup of Figs gets poisoned for her trouble. Safer to stick with the cream instead.