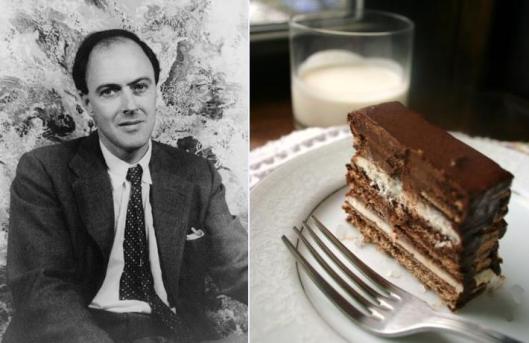 As I was growing up, no book did more to encourage my incipient interest in dessert than Charlie and the Chocolate Factory. Willy Wonka’s world offered a blissful alternate universe, where candy was not dangerous, or merely delicious, but magical. How different this is from the food corporations we hear about today—the ones that have conspired to hook us on salt, sugar and fat. There aren’t many Wonkas in the world anymore; we’re in a food world run by Slugworths.

Roald Dahl himself was the industry’s perfect victim, growing up just as large chocolate companies were asserting their influence. When he was born, in 1916, “The chocolate revolution had not begun,” he wrote in the Sunday Magazine. “There were very few delicious chocolate bars to tempt us.” But soon, chocolate was everywhere—and nowhere was it more influential than in Dahl’s own backyard. His boarding school, Repton, was right down the road from the Cadbury chocolate factory, which would frequently enlist the boys to test new creations, mailing them boxes of bars to try.

The golden age, according to Dahl, was from 1930-37; that’s when the world saw the debut of the Mars Bar, Rolos and (Dahl’s personal favorite) the Kit-Kat. Until his death, in 1990, Dahl would eat at least one Kit-Kat every day. (His dog, Chopper, preferred Smarties, eating four after lunch and four after dinner) He would save their silver wrappers, adding them to a giant foil ball on his desk, where visitors to the Dahl house can still see it today.

Dahl was hooked early—but he began to notice the candy industry’s increasing interest in the “bland, almost tasteless” tastes the public preferred. His special disdain was reserved for one of Cadbury’s bestsellers, “the blandest and most disgusting thing of all,” the Crème Egg. These “fondant-filled horrors” didn’t have any of the surprises—the delightful crunch, the bright colors, the sharp flavors—of Dahl’s beloved bars. “Nobody I know eats them. But somebody obviously does, by the bucketful.”

Because it wasn’t sugar that hooked Dahl, after all; it was food’s magical ability to amaze, to astonish, to transform. When Dahl’s first wife fell ill, he would surprise her at breakfast with pink milk, because—why not pink milk? Like Wonka, Dahl saw how food opens us to a world of new sensations, new possibilities, new sensations. With every new taste, childlike, we encounter a bit of wonder.