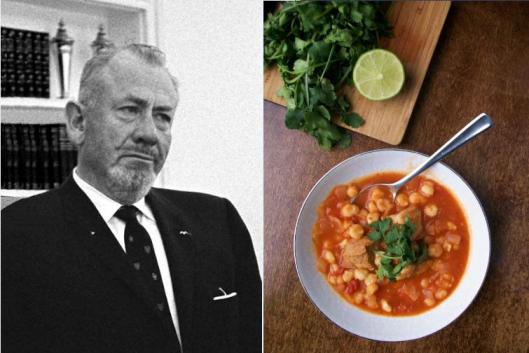 John Steinbeck was a locavore before it was cool. No matter where he was writing from, his letters always mention the local produce. In California, he bought a cow so he could make his own butter and cheese. In England, he foraged for dandelion greens (“cook them slowly and for a long time with pieces of bacon”). In Sag Harbor, he reveled in the local seafood (“I figure I can always catch my dinner”).

But sometimes you come home after a long day, and you don’t want to knead your own bread, dry your own pasta, butcher your own goat. You just want to buy a whole baguette, put some brie on it, eat it all while watching The Wire on Netflix and call that dinner. “I like good food and good clothes, but faced with getting them I can’t round myself into a procuring unit,” Steinbeck wrote in a particularly lethargic mood. I imagine he said it on the sofa in sweatpants.

Often it’s the presence of other people that keeps me from nights of cheese sandwiches in front of the TV; cooking for company is just more fun! But when Steinbeck was alone on the road, he would forget the butter-churning and revert to the life of a single guy. Hence his recipe for posole, borrowed from his friend (and famed screenwriter) Jack Wagner: “a can of chili and a can of hominy.” Hello, bachelorville.