Although many of John Keats’ most famous poems—Hyperion, Lamia, The Eve of St. Agnes—include descriptions of lavish meals and crave-worthy feasts, the man who penned them is better known for eating nothing at all. Diagnosed with tuberculosis at 24, Keats was prescribed a meager diet of bread, milk and anchovies; “the chief part of his disease,” his doctor wrote, “seems seated in his stomach.”

It was an especially grim sentence for a man who, only two years before, had an appetite that might kindly described as healthy, verging on hedonistic. “I get so hungry a Ham goes but a very little way and fowls are like Larks to me,” Keats wrote in a letter from 1818, before he had taken ill. “I take a whole string of Pork sausages down as easily as a Pen’orth of Lady’s gingers.” Roast beef was a particular favorite; he once praised a dinner host for “carv[ing] some beef exactly to suit my appetite, as if I had been measured for it.”

Keats’ letters preserve his contributions to literary history, but they also contain a surprising moment in culinary history: one of the first mentions of a roast beef sandwich in print. On a walking tour of the U.K. in 1818, Keats worked up such a hunger that he fantasized about food. “[I] long for some famous Beauty to get down from her Palfry … and give me—a dozen or two capital roast-beef Sandwiches,” he wrote—perhaps the only Romantic poet to privilege lunch over lust.

While the first appearance of sandwiches in print dates back to 1762, they were often made with ham; it wasn’t until the middle of the 19th century that roast beef sandwiches were popular enough to be referenced by cookbooks. By the turn of the century, the dish had firmly established its place in the lunchtime pantheon; Keats’ fantasy meal was well ahead of its time.

By the end of his life, however, roast beef was be exactly that: a fantasy. “The distended stomach keeps him in perpetual hunger or craving,” observed Keats’ Joseph Severn, who was tasked with monitoring the poet’s food intake. Severn himself was not so deprived. Imagine Keats’ agony if he could hear what his friend was eating just steps away: “I have 1st dish macarona [macaroni] … made of Flour with butter &c—very good—my 2nd dish is fish—and then comes Roast Beef or Mutton … every good thing—and very well cooked.” 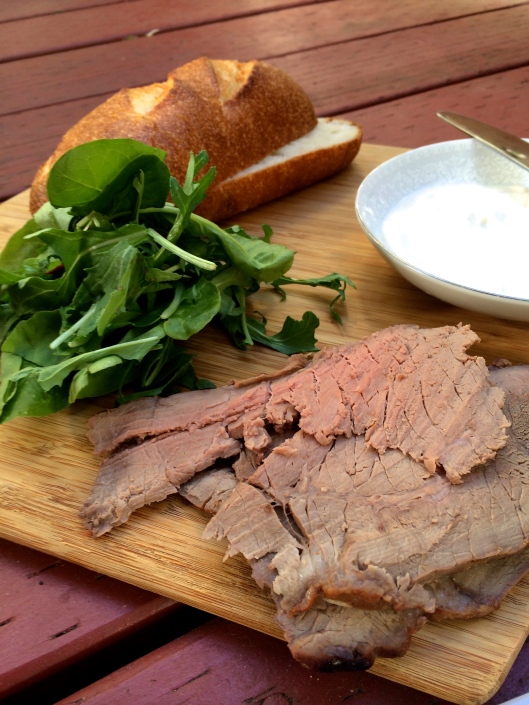