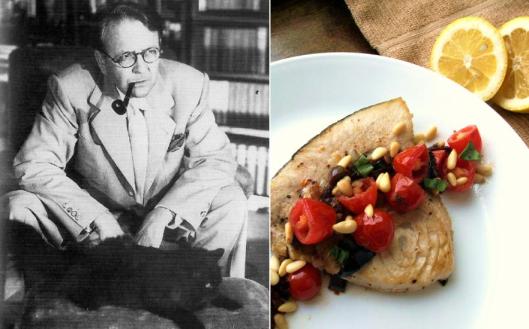 What to cook for Raymond Chandler on his birthday? If he’s known for anything vaguely digestible today, it’s Terry Lennox’s gin gimlet recipe from The Big Sleep: “half gin and half Rose’s lime juice and nothing else.” Sometimes that can be the basis of a whole birthday dinner menu, but it’s usually unintentional (and ill-advised, if my “popcorn and whiskey” birthday was any indication).

But it turns out Chandler had more than a few recipes up his sleeve – maybe even a cookbook’s worth. While working on The Long Goodbye in La Jolla, California, he wrote to editor Dale Warren with another surprising proposal. “Somebody really ought to write a cookbook and put in all the things that the regular cookbooks leave out, the things which, if you’re a beginner, the cookbooks don’t tell you,” he said. “Also, any decent cookbook should have a few special recipes, a touch of the unique. And this I could easily supply.”

Seen through his letters, Chandler becomes the Mark Bittman of La Jolla. He’s minimalist in his approach to food (his recipe for pork chops: “Cook them in their own fat, they bring everything with them that is necessary except salt and pepper.”). But he’s also deeply critical of Americans’ slide into non-cooking, 50 years ahead of the curve. He scorns his neighbor’s dependence on “a deep freeze unit in his garage where he keeps enough food for six months … Most of the other food he eats comes ready-prepared and half-chewed.” If you think that’s harsh, Chandler goes on: “I sometimes wonder what we are here for. Certainly not to use our minds.” It’s a relief he wasn’t around to see the rise of the Hot Pocket.

Chandler would have turned 124 today; I’ll celebrate my own birthday later this week. No popcorn and whiskey for me this time around. We’re older now, and wiser. We use our minds. We plan our menus. And there won’t be anything frozen or ready-made, although there may well be a gimlet or two.