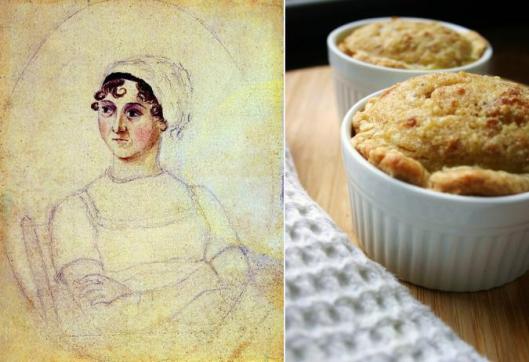 Even when you love to cook, there are those times when it would be nice to have just a little help: when you promised to make something for the office potluck but forgot to go shopping; when that dinner party you’re hosting sneaks up on you; when your in-laws you dearly want to impress are in town and all you have in the pantry are the three jars of peanut butter you bought before Hurricane Sandy.

Wouldn’t it be easier to live in Jane Austen’s world, where you could hand off such tasks to a very capable cook? Remember poor Mr. Collins in Pride and Prejudice, who, when asking which of the Bennets had prepared the meal, “was set right by Mrs. Bennet, who assured him with some asperity… that her daughters had nothing to do in the kitchen.”

Like Elizabeth Bennet, Austen wouldn’t be caught dead with a roasting pan—but she did know her way around one. After all, she wrote her novels in the middle of the drawing room, constantly interrupted by household demands. “I carry about the keys of the wine and closet, and twice since I began this letter have had orders to give in the kitchen,” Austen wrote to her sister, Cassandra. Maybe that’s why her novels are full of meals: she couldn’t write a few sentences without being asked to approve a dinner menu.

Austen was in charge of sourcing ingredients, preferring to grow fresh produce on the property. “What kind of kitchen garden is there?” she writes anxiously when her family is contemplating a move to Chawton. “I do not fail to spend some part of every day in the kitchen garden.” She also oversaw what was to be planted, and where. “The Border under the Terrace Wall is clearing away to receive Currants & Gooseberry bushes, & a spot is found very proper for Raspberries,” she reports.

Then there was the entertaining: a long parade of tea parties and dinner chats, so elegant in books but exhausting in the offing. After one particularly tiring evening, Austen wrote to her sister, “When you receive this, our guests will be all gone or going; and I shall be left … to ease the mind of the torments of rice pudding and apple dumplings, and probably regret that I did not take more pains to please them all.” Of course, she could always blame the cook if things didn’t work out. But that’s the upside to doing all the cooking yourself: When it’s good, you get to take all the credit.