There are two dueling schools of thought when it comes to great cooking. One says it’s all about ingredients; the other says it just boils down to technique. But in my experience, neither is wholly correct. To be a great cook, you must have time. Time determines how beef falls off the bone, or whether a soufflé stays aloft. Time usually decides whether we cook at all: if we don’t have enough of it, we’ll skip the process altogether and get takeout.

In No Time to Spare, published shortly before her death last week, Ursula K. Le Guin reflects on all the things that compete for our limited time. Her hours are “fully and vitally occupied with sleep, with daydreaming, with doing business and writing friends and family on email, with reading … with cooking and eating a meal and cleaning up the kitchen … None of this is spare time,” she writes. “I am going to be eighty-one next week. I have no time to spare.”

Le Guin was a master of time, especially at manipulating it. Her novels can collapse centuries into a single point, like a dying star. Her 1985 novel Always Coming Home involves a future society that closely resembles the past, with lessons for the present: three timelines in one. Perhaps her most well-known novel, The Wizard of Earthsea, switches between the future and past so often, you’re never quite sure what time it is. Reading Le Guin isn’t always easy. It’s not meant to be.

So leave it to Le Guin to take something that we rush through as quickly as possible—breakfast—and turn it into a meditation, a ritual unstuck in time. Rather than grabbing a coffee and a KIND bar, Le Guin settled in every morning for what she called “a Viennese cafe breakfast”: berries, tea, toasted English muffins (She couldn’t get “those lovely, light, crispy European rolls” in Portland) and, critically, a soft-boiled egg in the shell.

The soft-boiled egg was the crux of this breakfast ceremony. There were rules for everything from which way to position the egg in the cup (“I’m a Big-Ender”) to how to remove the circle of shell with the knife (multiple taps versus one whack). “This difference of opinion can become so passionate that a war may be fought about it,” Le Guin wrote, noting, “It makes just as much sense as most wars.” (In Gulliver’s Travels, there was, in fact, a war about soft-boiled egg etiquette, so it wouldn’t be unprecedented.)

My default egg preparation is the quick-and-easy scramble, so my husband watched, fascinated, as I performed the ceremony one morning, delicately placing Ursula’s three-and-a-half-minute egg on its own little pedestal. “Who thought breakfast could be so hard?” he laughed. But that, Le Guin says, is precisely the point. “If you crack a soft-boiled egg and dump it out into a bowl, it tastes the same but it isn’t the same. It’s too easy. It’s dull,” Le Guin writes. “The point of a soft-boiled egg is the difficulty of eating it.”

When we talk about cooking these days, the conversation is dominated by convenience: the 30-minute-meal, the to-go cup. It’s to be done as quickly as possible, so that we can all have more of that elusive “spare time.” But in cooking an egg, Le Guin shows us the beauty of difficult things: the things we do not to survive, not because we must, but because we’re challengingly, gloriously alive. 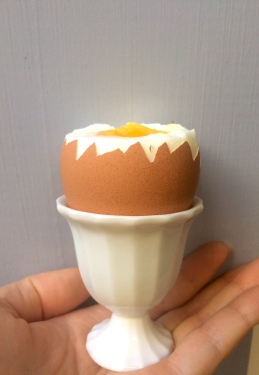 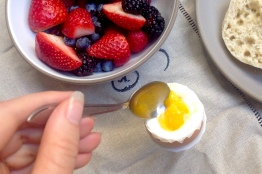